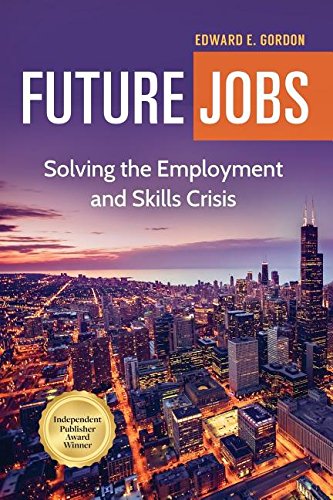 America’s low unemployment rate overshadows the fact that tens of millions of Americans are unemployed while employers are reporting that finding qualified candidates for vacant jobs is their top-ranked problem. In Future Jobs, historical economist Edward E. Gordon explains how increasingly complex technologies, global demographic shifts, and outdated education-to-employment systems are converging toward a labor-market crisis. How can we create the skilled talent urgently needed for the jobs of today and tomorrow? This books points to a solution gaining traction across the United States: Regional Talent Innovation Networks (RETAINs), alliances of businesses, educators, government agencies, and nonprofit organization that are successfully bridging the talent gap. Additionally, it provides information on the most promising jobs and careers of the next decade for early-career job seekers and for workers who are looking to change career paths.

“Edward Gordon’s new book Future Jobs: Solving the Unemployment and Skills Crisis has brought a number of disciplines to the top macroeconomic problem of our day. His analysis provides a proper perspective of structural unemployment and the many avenues to address this problem. Gordon’s book is a must read for any serious policy maker and students looking at today’s labor market.”
—John E. Silvia, Chief Economist, Wells Fargo

“Edward Gordon brings a good deal of data, insight and clarity to a hotly debated topic: the skills required by the workers of the Postindustrial Age. … Future Jobs maps out the dimensions of an underappreciated crisis confronting not only the United States, as well as many of the world’s developed and emerging economies: the rapidly growing shortages of adults who possess the basic skills to qualify for high growth, information-intensive jobs of what the author calls the age of “cyber-mental work.” … Future Jobs makes a convincing case that there is an urgent need to provide tens of millions of U.S. workers — both the unemployed and employed — with advanced cognitive skills. … He concludes that the only effective means by which America can timely address its workplace skills crisis is through local initiatives: Employers collaborating with educators, government, and civic leadership to provide millions of individuals with the specific skills required to perform the jobs of our Cyber-Mental Age.”
—David Pearce Snyder, The Futurist

“Ed Gordon has effectively described the perfect storm — the Talent Cliff — as well as our safe harbor — RETAINs. In the United States we face an absolute crisis in education and training that can be absolutely flipped into the foundation for a truly sustainable society. His prescription for RETAINs gives us the kind of independent public-private partnership that’s essential for success and overcoming the public and private sector silos that have prevented breakthroughs in education and workforce development. Future Jobs: Solving the Employment and Skills Crisis is an essential resource for community, educational, labor, governmental and business leaders throughout the country.”
—Dan Swinney, Executive Director, Manufacturing Renaissance

“If you care about the future of our economy for the next generation, read this book. Gordon delivers a wake-up call and it’s time for us to wake up. Future Jobs provides all you need to know to get engaged — really engaged — in the single most important challenge we face as a nation: transforming our economy by investing in people and skills. With each of us taking small steps, our nation can make a huge leap. That’s how it’s done. That’s how it’s always been done.”
—Ed Morrison, Director, Purdue Agile Strategy Lab Divided on D-Day‘s coauthor is David Ramsay, the son of Admiral Sir Bertram Ramsay who was the naval commander-in-chief for the Normandy Invasion and who earlier directed the Dunkirk evacuation. He is the author of Lusitania Saga and Myth and ‘Blinker’ Hall Spymaster: The Man Who Brought America into World War I.

“This is one of the most profound what-if books written on World War II.”
—Alan Axelrod, author of The Real History of World War II and Patton’s Drive

“Offers an excellent synthesis and new insights not previously considered on Allied strategy and operational planning based on the personalities and interactions of the commanders who made them.”
Read the entire review.
—Jerry D. Linaburg, New York Journal of Books

“The first Anglo-American team to produce a general history of the Normandy Campaign. … A great strength of the book is the synthesis of the last two decades of scholarly and popular writing on its subject. … Gordon and Ramsay have written an eminently readable one-volume study of the planning and execution of the Normandy Campaign … [that] will position Divided on D-Day as the book to be quoted as we reflect on D-Day’s [75th] anniversary.”
— Thomas E. Hanson, Michigan War Studies Review

“Bold and engaging, Divided on D-Day brings renewed attention to the personalities surrounding Operation Overlord and the Allied campaigns in France and the Low Countries during World War II. With its share of heroes, including Eisenhower, Patton, Bradley, Montgomery, and the often overlooked Sir Bertram Ramsay, this book does not necessarily overturn existing historiography but highlights interpersonal conflict… A quick and lively read.”
–James Villanueva, Captain, US Army

“This fast-paced and engrossing study of the Normandy campaign’s major leaders illustrates how the interaction of their heavyweight personalities shaped the results. Edward E. Gordon and David Ramsay know their facts, and readers will enjoy assessing their conclusions.”
—David Freeman, editor, Finest Hour, journal of the International Churchill Society

“References to the Anglo-American ‘special relationship’ notwithstanding, the partnership between Britain and the United States during World War II was marked by frequent disagreements, quarrels, and even occasional bitterness. Each country needed the other, of course, so the disputes never quite derailed the alliance. In this new book, two scholars—one American and one British (in fact, the son of the Allied naval commander at Normandy, Sir Bertram Ramsay)—show just how close the Allies came to fracturing. The authors’ vivid portraits of the key figures in the D-Day campaign are entirely convincing.”
—Craig L. Symonds, author of Neptune: The Allied Invasion of Europe and the D-Day Landings

“A meticulously researched examination of the key personalities in the Normandy campaign and their campaign highs and lows. Some readers will disagree with the authors’ assessments, but with hundreds of supporting quotes from participants, the authors have provided substance and weight to their arguments. None of the Allied commanders were without flaws, and with the events seventy-three years in the past, it is time for a fresh study. Provocative and sometimes scathing, this book will create debate and reevaluation, and that can only be a positive thing.”
—Paul Woodadge, Normandy tour guide and author

“The key elements of this book are the intricate portraits drawn of the D-Day leaders. … The authors provide a fair and evenhanded assessment of all the leaders they describe. … The level of detail given and the quality of sources utilized are excellent, including an exhaustive review of personal journals, historical expert testimony, and thirty outstanding maps.”
—Richard A. McConnell, Finest Hour Magazine 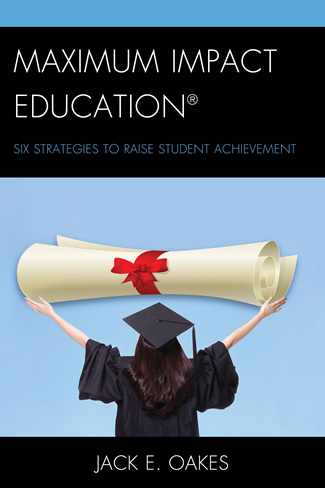 Education is a starting point in developing America’s talent. That is why Maximum Impact Education is so important. In this groundbreaking book, six strategies are revealed that use the RETAIN concept to create a new approach for raising student achievement. Educator and author Jack E. Oakes presents a blueprint for how our nation can prepare high school graduates to meet the challenges of the 21st century. Maximum Impact Education provides useful insights on the work needed to gradually overcome the silos that divide people in their communities as they struggle to rebuild relevant education-to-employment systems for America’s rapidly changing labor market.

“The story of how Santa Ana discovered the power of the ‘Business and Education Connection’ is an important one for every town, city and community in America.”
—David Elliott, President/CEO, Santa Ana Chamber of Commerce

“Maximum Impact Education is a landmark book with the promise of positive change for education in the twenty-first century.”
—Patricia Nellor Wickwire, President, American Association for Career Education

“Oakes’s ‘New Investment High School’ is not a theoretical model, but a practitioner’s handbook. He deftly shows how and why his strategies can benefit all students.”
—Al Mijares, Superintendent of Schools, Orange County

“Parents, educators, and policymakers all levels can now read a playbook for crafting a new choice in education, a choice we have always known in our hearts, but never put into action … until now.”
—Donnie Crevier, President, Crevier Classic Cars

“Stimulating, inspiring and timely! A clever use of anecdotes, case studies and research that delivers the goods on school reform.”‘
—Susan Dixon, Financial Service Executive

“Jack E. Oakes makes clear that the ‘assembly line’ mentality of ‘one size fits all’ misses the point of what our students need.”
—Lawrence D. Sporty, Psychiatrist/Educator 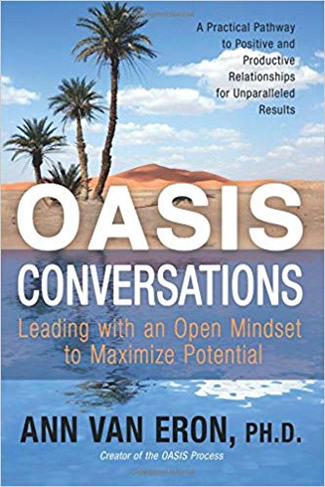 OASIS CONVERSATIONS:
Leading with an Open Mindset to Maximize Potential

But guess what? Those people think they are open-minded too, and they probably think you’re the problem.

What if you could turn the desert of miscommunication that exists into an oasis where you have refreshing conversations that allow you to understand where the other is coming from so that you can develop empathy, insight and reach mutually beneficial agreements?

In OASIS Conversations, Ann Van Eron draws on scientific brain research and decades of coaching experience to share a pragmatic signature system for breaking through communication barriers and achieving mind-opening connections with others.

Find out why global organizations, Fortune 500 corporations, and even families are benefitting from the OASIS Conversation® process. Learn how to create positive and productive environments to minimize misunderstandings and reap unparalleled results.

“Whether one aspires to be more socially intelligent or a more effective change leader — or both — following Ann’s advice and suggestions will lead the way for a worth journey and set of goals.”
—W. Warner Burke, Ph.D., Teachers College, Columbia University

“We can be taught to be emotionally smarter. Anne provides clear instruction for her proven method.”
—Raymond E. Crossman, Ph.D., President, Adler University

“The OASIS method has been a safe haven for me in an uncertain world.”
—Kelly Wojda, Director of Diversity & Talent, Caterpillar